The Great Wall was built long ago. This means that construction techniques were relatively primitive. It also means that it has had to survive for a long time. Therefore, deterioration has been significant. But the condition varies greatly from place to place. Some areas look pretty much like they must have looked when the Great Wall was new, while other areas have deteriorated so badly that it’s hard or even impossible to tell that the Great Wall was ever there at all.

Causes of damage to the Great Wall can be divided into two categories: natural and man-made.

Much damage to the Great Wall has been caused by years and years of rain. Rain eventually washes away a small spot which then weakens as a result. The weak spots grow under the stress of additional rain, and after a while they become significantly damaged. 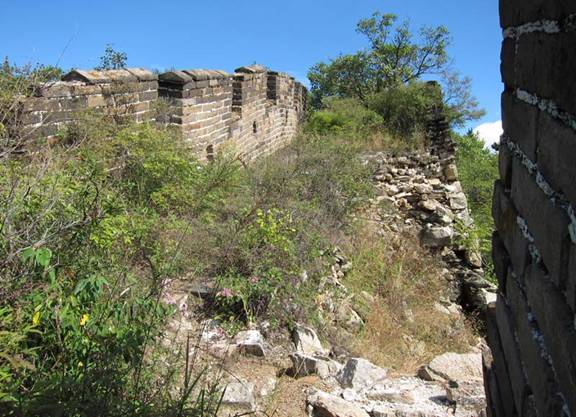 Foliage growing on the Great Wall penetrates the structure and allows water to enter, resulting in more damage.

People have also directly caused a lot of damage to the Great Wall in the past, and this continues today. Local people in many areas have removed bricks and stones from the Great Wall and used them for other construction. This is most evident in lower and more accessible areas.

In other cases, the Great Wall has been damaged in the course of various construction projects. The Chinese government has begun to crack down on this and several highly-publicized punishments have been given.

Sadly, damage has also been caused by repairs of substandard quality. Any time repairs are made to the Great Wall, be they minor repairs or major restorations, if they are not done in the same style used by the original builders, then the Great Wall can be considered damaged because it is no longer authentic.