Just west of Jiankou Jiangjunshouguan, you will see a trail to the right (north) that leads to Xizhazi. If you pass this trail, you will reach a very steep and narrow uphill section known as Tianti, which can be translated as Sky Stairs or Heavenly Ladder. There's also a Tianti at Simatai, which is always translated as Heavenly Ladder, so it's good to refer to the Tianti at Jiankou as Sky Stairs to avoid confusion. 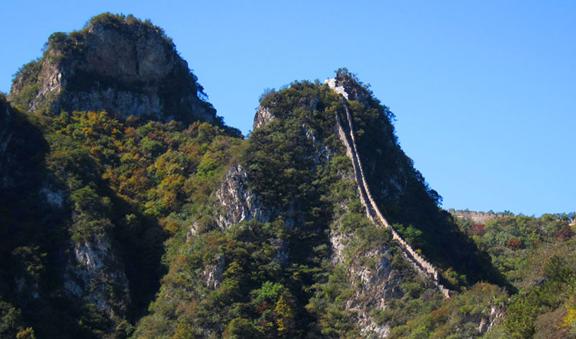 Sky Stairs viewed from the east

Sky stairs is relatively long and steep slope but it's most famous because it's very narrow. The narrow width of the wall here was dictated by the narrow size of the ridge upon which the wall was built. At its narrowest point, the inside width is about 55.5 centimeters (21.5 inches). 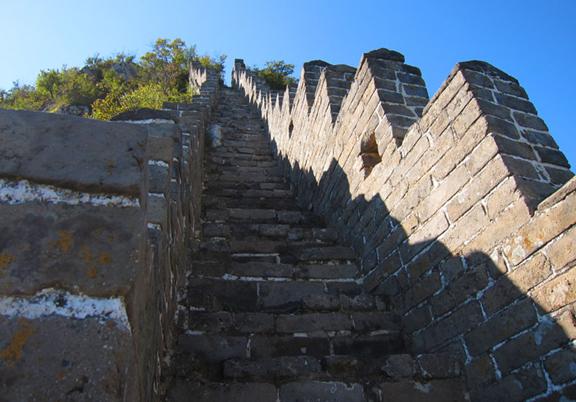 Sky Stairs from below

Tianti is the western slope of a feature that comprises three mountains and is known as Yingfeidaoyang. Yingfeidaoyang can be translated variously as “eagle flies upside-down” or “upward flying eagle”. Some people say its name derives from the fact that it's higher than eagles fly so they have to fly up to get there. Others say it got its name because its contours resemble an eagle, and while I have heard of many places in China where mountain contours are said to resemble tigers, dragons, and more, I usually can't see it. But from Xizhazi, Yingfeidaoyang really does resemble an eagle with outstretched wings. The summit of Yingfeidaoyang is 954 meters (3130 feet) high. Before the central summit of Yingfeidaoyang, a Northern Qi Dynasty wall originally led to the left (southeast) while the Ming Dynasty wall continues to the right (north). But now it's nearly impossible to see the remains of the older wall from the main wall. It is possible to find and follow the older wall but this is very difficult. Continuing on the northern path of the main wall, you will go down for a while and then you are going up another mountain which is quite formidable. 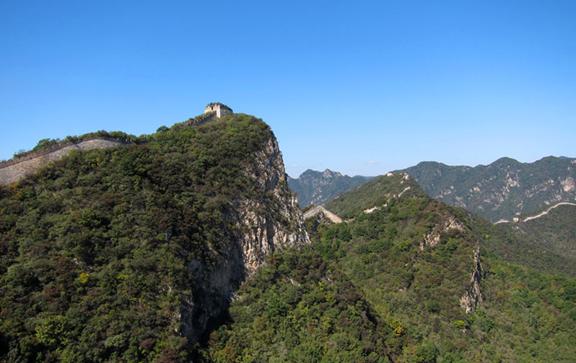