The Wohushan (Wo Hu Shan or Crouching Tiger Mountain) Great Wall is a very interesting place for a visit to the Great Wall. It's a must for anyone in the Gubeikou area. Wohushan is officially open and tickets are inexpensive, but there are not a lot of tourists here at all. 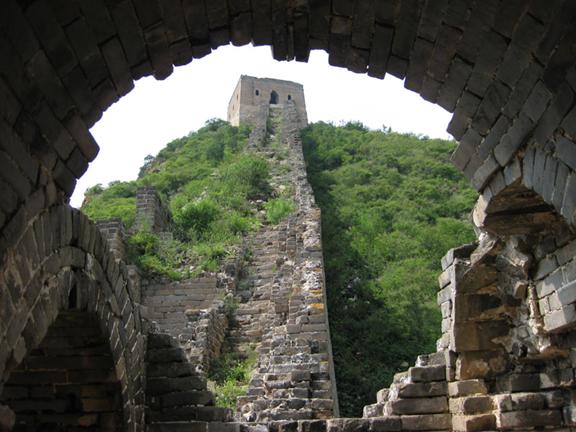 No rebuilding has been done on this section of the Great Wall since the Ming Dynasty. The parts closest to the entrance are in a highly deteriorated condition, and the condition improves as you walk further to the west. Some towers and sections of the wall are in nearly perfect condition, but most of them show significant signs of aging or near-total decay.

From the entrance, there is a well-marked trail that leads to the Great Wall near the river. Along this trail, you will pass a temple that has had several names in its long history, including Ciyun Temple, Qianjian Temple, Wanshou Pavilion, Wanshou Temple, and, most recently, Luzu Temple. 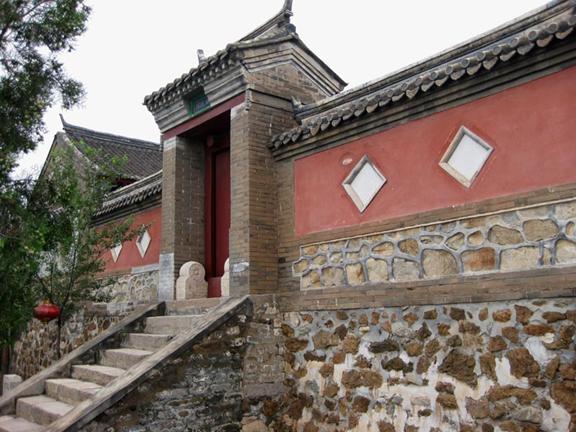 Shortly after this temple, there is a side path that leads off to the left (north) that leads to the remains of a brick kiln that was used to create bricks used in the Great Wall in this area. It's not a well-marked or heavily-used trail and the kiln is not easy to find.

Continue along the main path for a few minutes more and you will reach the wall at the point of a very deteriorated tower. The total time to walk the trail from the entrance to the Great Wall is about ten minutes. The wall continues down (east) from this point, but you can't climb down to it from here. It can be reached from a side path back along the trail you just walked down if you want to try, but it is highly overgrown and difficult to follow. And once you reach this lower part of the wall, you can't go very far before you will have to turn around and return.

From the point where the trail first meets the wall, turn to the left (west) and begin climbing up. At this point, you are actually climbing up Wanshoushan or Longevity Mountain. You will reach the summit of Wanshoushan, and then climb back down to a valley. Most of the path is alongside the wall, and in fact the wall is so deteriorated that it would be impossible to walk upon it. The last part of the descent into the valley is probably the most difficult part of the entire climb. Be sure you stay on the indicated trail in this area. Next, you begin the long climb up the actual Wohu mountain. The path alternates between being next to the wall and being upon the wall. The higher you climb, the better the view gets. The condition of the Great Wall generally improves along the way too, with some exceptional areas. There are some sections where there is a well-worn trail alongside the wall, but it is also very possible to walk atop the wall as well if you prefer. Of course, walking alongside is more secure. You may prefer to go up one way and down the other. If the weather is clear you can see the entire Panlongshan Great Wall across the valley and, as you get higher, you can begin to see Jinshanling. Once you near the summit, if you're really fortunate with the weather, you can see as far as the Simatai ridge to the east. You can get spectacular photographs showing tremendous distances along the Great Wall in a most fantastic setting. From the highest point, you can see a great distance in all directions. It seems like you can see Great Wall segments and towers almost everywhere you look. The elevation at the peak is about 600 meters (2000 feet). 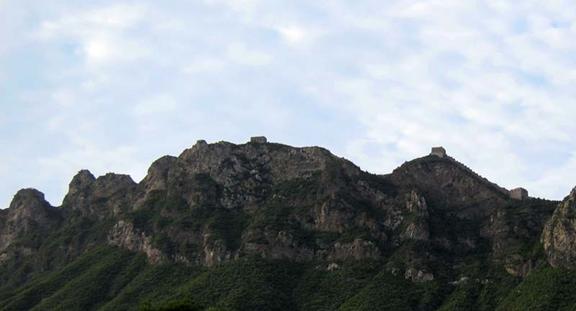 Further down and to the west, there is a gap of about 600 meters (2000 feet) where no wall exists. It's easy to see why. The two peaks following the summit are extremely precipitous and you won't want to try to climb them. Most people will choose to turn around and come back the way they came at this point. There is a path that leads around the north side of these two peaks to rejoin the wall, but it's a difficult path to follow. It's a pity about this gap because the wall on the west side of Wohushan is just as interesting as the wall on the east side.

After leaving Wohushan and heading generally to the west, the Great Wall leaves the Beijing-Hebei border and goes towards the center of the Beijing municipality.

Driving directions: From Beijing's north sixth ring road, drive northeast on G101 for about 94 kilometers (58 miles) to Gubeikou. Turn left in the center of the village and cross the bridge towards Hexicun. The Wohushan Great Wall entrance will be about 500 meters (1640 feet) down on the right. 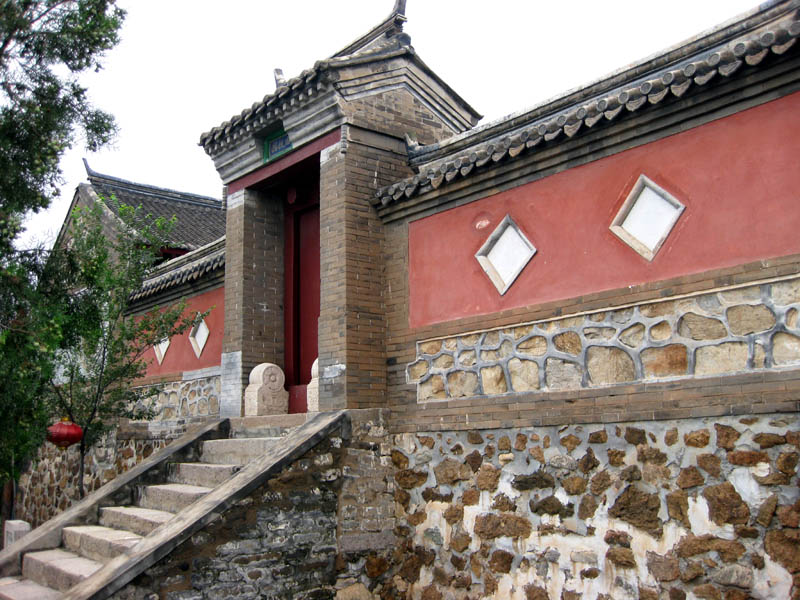 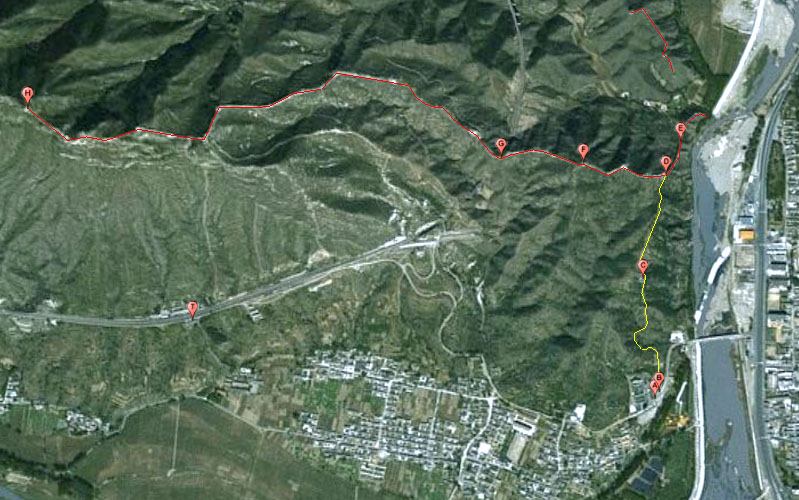 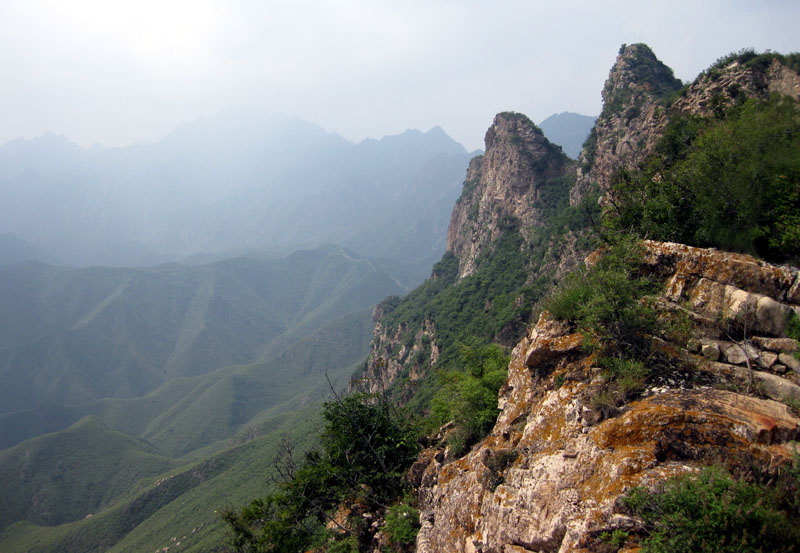 View beyond the summit

Overall, I find Wohushan very impressive. It reminds me of a mirror image of the Simatai ridge. In fact, it's quite unfair (but possibly advantageous to you) that Simatai is so much more popular than Wohushan, and it's interesting to compare them:

Permission – Both Wohushan and Simatai are officially open, but while the highest parts and the summit of Simatai are closed and guarded, all of Wohushan is open to the public.

Condition – Wohushan retains its original, authentic appearance, while Simatai has been restored in some areas.

Views – While both Wohushan and Simatai offer excellent views, the views of the distant, sprawling Great Wall are better from Wohushan.

Crowding – Wohushan has very few tourists; Simatai has many.

Vendors – Wohushan has no locals following you and trying to sell you souvenirs; at Simatai, they're hard to avoid. But be sure to bring any refreshments you need with you at Wohushan because, unlike Simatai, you won't find them along the Wall there.

Hotels and restaurants — Wohushan has one nice hotel near its entrance, which has a nice restaurant. Simatai has several hotels with restaurants, but they are not as nice as the one at Wohushan.