Just 8.4 kilometers (5.2 miles) north of Guguan, and also near the Shanxi-Hebei border, is the Niangzi Pass, Niangziguan. It is situated in a busy industrial area. With both cultural relics and beautiful scenery, Niangziguan is a worthwhile place to visit.

The pass was built during the Ming Dynasty, in the year 1542.

Originally called Weizeguan (Reed Pond Pass), the pass is now called Niangziguan, meaning Women's Pass. According to legend, Niangziguan gets its name from a Tang Dynasty princess named Ping Yang, third daughter of Emperor Li Yuan and the sister of Emperor Li Shimin. She commanded an armed force of women soldiers that set up a garrison here. Princess Ping Yang earned enduring fame by riding a horse and carrying a sword in a brave and proud manner. 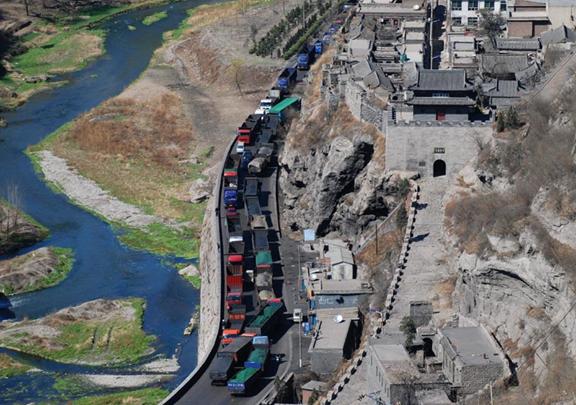 Niangziguan originally had two gateways which were named Shangguan (Upper Pass) and Xiaguan (Lower Pass). After the reconstruction during the Ming Dynasty, new gateways named Dongguan (East Gate) and Xiguan (West Gate), were built to replace the old ones. The east gate was built with ordinary bricks, with a placard above the gate bore the inscription 直隶娘子关 (zhí lì niáng zǐ guān), meaning Niangziguan is under the direct control of the capital. On the gate, there is a gate tower for inspecting the troops and watching the enemies. Inside the gate, there is a brick platform which is said to be the general assignment platform of Princess Ping Yang. The bluestone-built south gate was inscribed with distinctive 京畿藩屏 (jīng jī fān píng) characters meaning protective shield of the capital. In front of the gate is a stone paved ancient road. The gate tower on the south gate is said to be the place where Princess Ping Yang once opposed the enemy. In the pass, the Guandi Temple, Zhenwu Pavilion, residences and streets still keep their original features.

Rebuilt with an apparent disregard to historical accuracy, Niangziguan looks much different from its appearance in older photos which were taken before the reconstruction.

There are many other scenic spots at Niangziguan, including Chengtianzhai, Laojun Cave, Beacon Tower and Summer Tower. Near the Niangziguan Pass, there are many places of historic interest, such as the Platform for Appointing Commanders, the Tower of Veteran General, and the Washbasin-Like Pool. The impressive Niangziguan Waterfall is located about 560 meters (1850 feet) east of the pass at the Tao River. 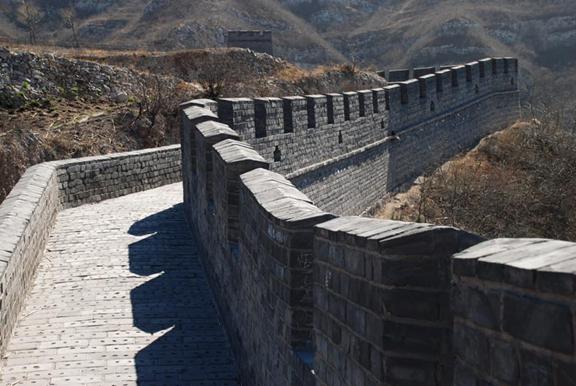 A wall runs for about 660 meters (2160 feet) southward from the pass to the base of the Mianshan Mountain, which has an elevation of 750 meters (2460 feet). To the north of the pass is the Tao River. This location creates a strategically advantageous position for Niangziguan.

Location summary: Niangziguan is about 306 kilometers (190 miles) southwest of downtown Beijing. It is about 8.5 kilometers (5.3 miles) north of Guguan.