Jiugukou is the name for the pass at the base of the Hefangkou area Great Wall.

Want a challenging hike / climb on an old stone wall in difficult terrain? Hefangkou may be just for you. Hefangkou is easy to get to but not easy to climb. The surfaces contain loose stones and portions are very steep.

Hefangkou is one of the closest and easiest places to access the Great Wall from Beijing. It's on the main road just north of Huairou. Once you reach the Hefangkou area, getting from the road to the Great Wall is also easy, with two short trails on the east side and one short trail on the west side.

On the eastern side of the Hefangkou Great Wall, there is one place where there is a high step on the south side of a tower at 40°26'46"N 116°39'57"E. It's nearly impossible to pass this step and difficult to go around. There are two paths to access the east side of the Hefangkou Great Wall. The more northern path goes to the high side of this point and the more southern path goes to the lower side. The northern path runs next to a restaurant and begins on their property around 40°26'37"N 116°39'48"E. They appreciate it if you use their restaurant if you use their path, and since they have good food and friendly service for reasonable prices, there's no good reason not to do so. 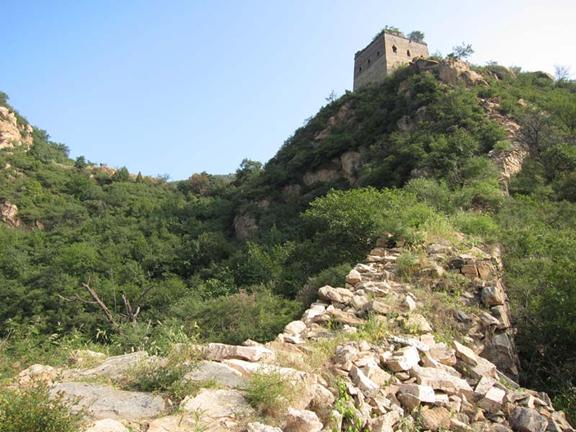 Eastern side of the Hefangkou Great Wall

From this trail, you will want to turn left to go up, north and then east towards Qinglongxia, or right to head down towards the south. Following the wall on the east side of Hefangkou upward towards Qinglongxia, you will pass a couple of towers and then the wall will end against the base of a cliff. Beyond this point, there are three gaps at cliffs or steep inclines, and there area two short spans of wall in between the gaps, before the wall begins a longer section at Qinglongxia. There are paths around these gaps, but they are rarely used and therefore difficult to follow, especially in seasons when vegetation grows heavily. And once you reach the beginning of Qinglongxia, you will find the fence monitored with security cameras which is not easy to get around.

The trail that provides access to the lower (southern) portion of the eastern side of the Hefangkou Great Wall begins around 40°26'19"N 116°40'4"E. This is a longer path then the northern one but less steep. Once you reach the wall, you can turn right to head north or left to head south. North is the better option because the wall to the south leads back towards the road and the wall becomes more highly deteriorated as it gets closer to the road. It is actually possible to access the wall from where it meets the road but this is a difficult way to go.

Accessing the western side of Hefangkou is done on a trail that essentially follows the path of the wall itself, although like on the east side, the wall on the west side is in a more and more deteriorated condition as it gets closer and closer to the road, and at the road it is entirely gone. The trail begins around 40°26'21"N 116°39'52"E. As the trail approaches the wall here, you can see one of the difficulties involved in mapping the Great Wall. At first you see a stone or two here and there on the path. Gradually, the number of stones increases until you finally realize that you're actually walking on the remains of the Great Wall rather than a path through the woods that has a few stones strewn about. Defining where the wall actually begins is somewhat arbitrary. 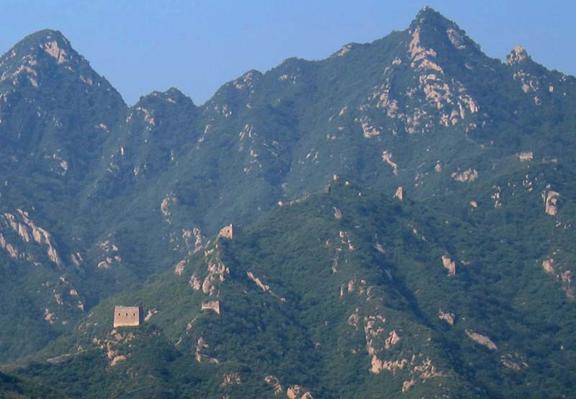 Western side of the Hefangkou Great Wall

The wall on this side is more nearly continuous than on the eastern side, with only a few gaps. A couple of the gaps consist of giant stones that are incorporated into the wall and must be climbed over or bypassed. There are many places where the wall has long, steep, and crumbly inclines and great care must be taken if you intend to climb these portions. After a distance of about 2.5 kilometers (1.5 miles), the wall dwindles down to nothing and there is a gap of about three quarters of a kilometer (half a mile) where no wall exists before it begins again nearing Shentangyu. This is a very rigorous piece of terrain. This is the reason why no wall was built here; passing on foot is very difficult. This pertains not only to invaders of the past but to you as well. If you intend to hike this area, be prepared for some difficult and risky rock climbing.

Driving directions: From Kaifang Road in the Huairou urban area, go north on G111 for about 15 kilometers (9.3 miles) to the Hefangkou Great Wall.