The Simatai Great Wall is one of the most famous and spectacular parts of the Great Wall. The Great Wall at its highest part here is built on a knife-edge ridge that reaches nearly 1000 meters (3280 feet) elevation. The highest and most exposed portions are very dangerous but are officially closed to tourists. To the west, Simatai joins with the Jinshanling Great Wall and offers excellent hiking opportunities.

Simatai is further away from Beijing than the locations in Huairou District and Yanqing County. It's about a two and a half hour drive from downtown Beijing. It is reached by taking the Jingcheng expressway from Beijing, through Miyun and northward towards Gubeikou and Chengde. Just before reaching Gubeikou, you will see signs to turn off to the right to Simatai. It's about 10 or 15 minutes from that point to the entrance to the Simatai Great Wall. Once you reach the parking lot, you must walk for about 30 minutes along a winding path to reach the entrance of the Simatai ridge, just above tower 2. You can also take a cable car that leaves from near the parking lot. It can take you about halfway up the ridge on its north side. This is an open-air, two seat cable car that gives you a very nice view of the Great Wall as it approaches. From the top cable car station , there is a steep path you must walk up to reach the wall. There is a fork in this path, and the steeper right fork winds up a switchback path and meets the Great Wall just past tower 8. The left fork is more level and joins the Great Wall between towers 5 and 6. There is also a short funicular starting at the upper cable car station which can take you halfway up the path to tower 8. 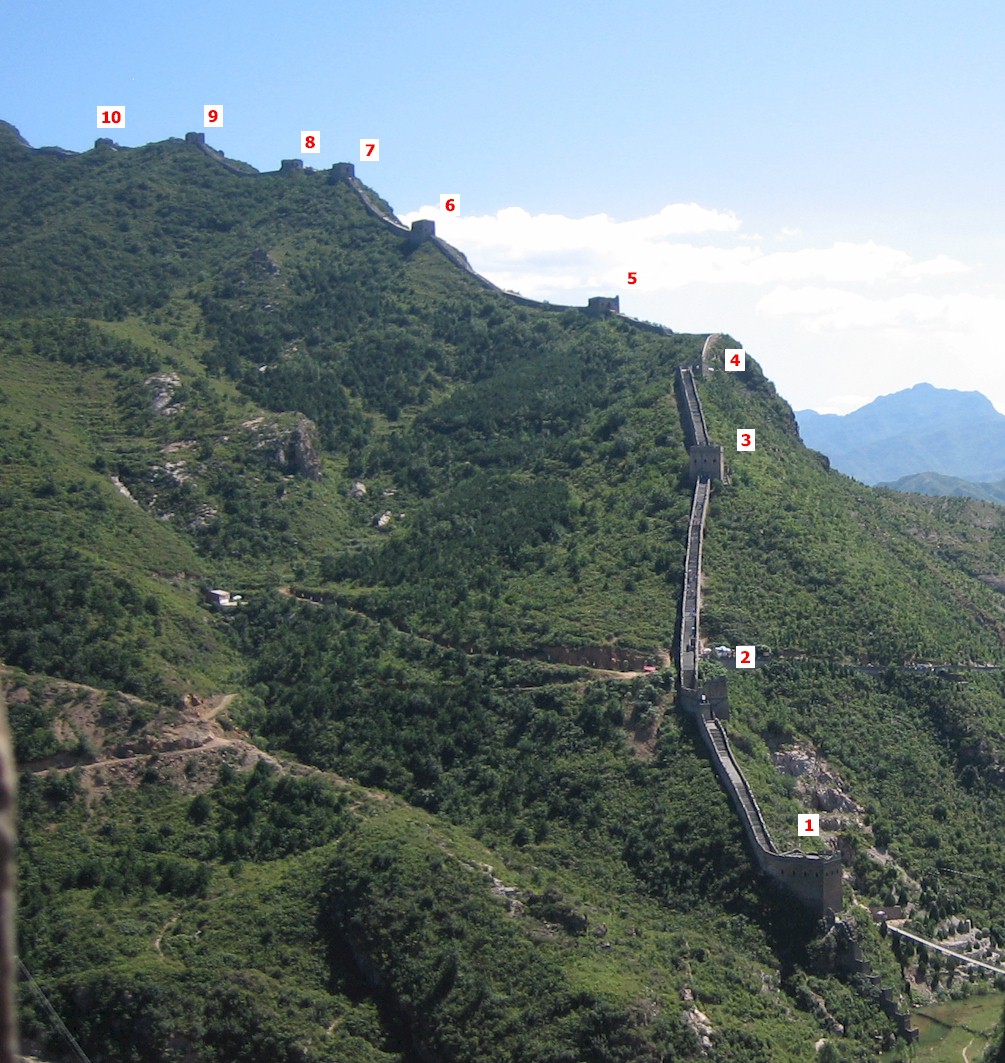 The pass at Simatai was submerged when a reservoir was built in 1977. A span of 3 kilometers (1.9 miles) at the lower part of the Simatai Great Wall was restored in 1987. Only the lower parts on both sides of the reservoir were restored. The restoration was partial, making it safer to climb while retaining a lot of the original appearance. Walking either to the east or the west from the main entrance at the reservoir, you will soon reach the end of the restored section, and then walking requires more concentration. To the east, along the Simatai ridge, it's the span between towers 11 and 12 that is most deteriorated.

Simatai, and especially the Simatai ridge, is truly spectacular. UNESCO accepted Simatai as a World Cultural Heritage site in 1987. The way the wall is built upon a high ridge makes it look like a wall built upon a wall. People question why it was necessary to build this wall on such a steep mountain ridge that is very difficult to cross even without a wall. But to any potential attacking force it surely sent a very powerful message that China was extremely well-guarded and that the Great Wall was built without compromise. The highly-esteemed professor and Great Wall historian Luo Zhewen once said, “The Great Wall is the wonder of the world, and Simatai is the wonder of the Great Wall”. A sign to this effect was installed near the entrance to the Simatai Great Wall. Luo later came to regret this statement—and the sign was removed—but he nonetheless did once say it.

If you're planning to hike to Jinshanling and you don't intend to climb up the Simatai ridge, you should take the foot path. As you walk along this path, the western Simatai Great Wall, which leads to Jinshanling, will come into view. When you reach the wall, you will turn left and head down to a swinging bridge that takes you across to the west side of the reservoir. However, even if you are planning to hike to Jinshanling, try to make time to check out the Simatai ridge. It would be a shame to miss it.

If you take the foot path to the ridge, you will enter the wall just above tower 2. From here you will climb upward to tower 3. This section of the wall is relatively steep, especially for people who don't have much experience climbing the Great Wall. You will be surprised at the long series of steps to reach each successive tower. Take it slowly and enjoy the ever-improving views as you ascend. One particular view that's significant is directly across the valley to the mountain ridge on the opposite side. You will see the remains of an old wall going up the ridge. This is the Northern Qi Great Wall. While much of the Great Wall in this area is built on the foundation of the Northern Qi wall, the Ming builders chose a different route at this point.

Tower 4 is an interesting, mostly-destroyed tower. Starting at this point, the wall is one-dimensional, basically a single, narrow wall with a walkway to its south side, rather than the usual configuration of the Ming Dynasty Great Wall. This is commonly known as “one-sided” wall. Along this wall you will find a place where a large boulder allows you to sit upon this unique Wall and have your photo taken, which you will most likely see other people doing. The wall was actually built this way during reconstruction as the original Wall here was completely destroyed. Originally it was probably the typical design, and just before tower 5, the wall indeed becomes “three-dimensional” again. Just past tower 5 you will see an access point which leads to one of the two paths to the upper cable car station. Again after tower 8 you will see a path to the cable car. After tower 10 the wall curves around to the left and at tower 11 it nearly disappears for a while and you just basically climb on rocks until you near tower 12. Don't miss the lotus flower carvings on the archway to tower 12.

After tower 12 you will climb up to a terrace. Beyond this point, the wall is officially closed. There are usually, but not always, guards at this point. Some of them have been known to allow people to pass in certain situations, and others have been known to be completely unrelenting. Continuing beyond this point is very dangerous but not impossible. The wall here becomes “one-sided” again. After the fourteenth tower, you reach a very steep uphill section known as Tianti or Heavenly Ladder. 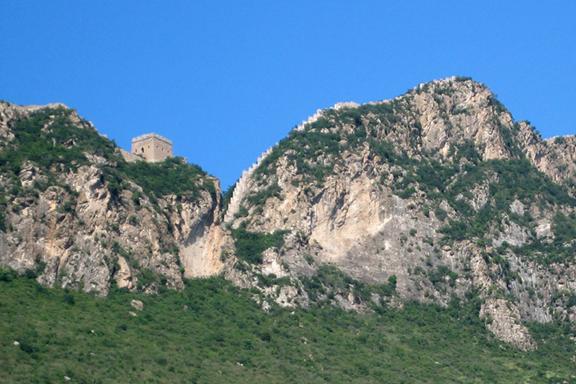 The lower part of this section is at about an 80-degree angle and many steps are more than one meter high. At the top of the Heavenly Ladder, the ridge is quite narrow and there is no longer a walkway beside the wall, so one must walk upon the wall, which is approximately one meter (three feet) wide and, at some parts, less.

The fifteenth tower is called Xiannulou, the Fairy Tower, Fairy Maid Tower, or Fairy Maiden Tower. This tower, steeped in legend, is one of the most slender towers on the entire Great Wall due to the narrow ridge on which it is built. Xiannulou marks the beginning of a section approximately 100 meters (328 feet) long known as Tianqiao, or Sky Bridge. This is probably the most dangerous span of the entire Great Wall. The wall narrows to approximately one-half of one meter (one and a half feet), and again, sometimes less. Falling here is almost sure to be fatal. Some of the steps in this span are more than a meter in height and a couple of them are nearly two meters high. Tianqiao is actually easiest to cross going from east to west because you can go down, rather than up, these very high steps. However, this direction requires you to also go down, rather than up, Tianti, which to me is much more scary and difficult.

At the east end of Tianqiao is tower 16, the highest tower at Simatai, called Wangjinglou, Wangjing Tower, the Capital-in-sight tower, or the Tower for Viewing the Capital. Its elevation is 986 meters (3235 feet). It's said that from here one can see the lights of Beijing on a clean night, and maybe that was once true for the view from here is very impressive indeed. 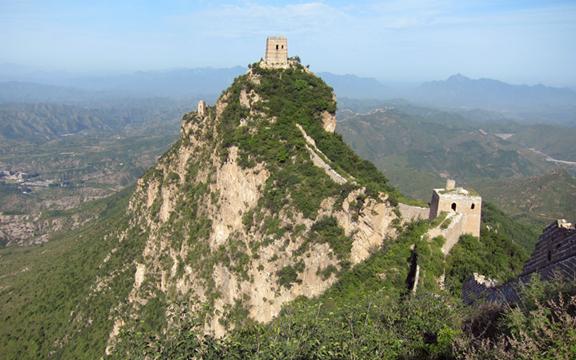 To the east of and downhill from Wangjinglou there is a tower called Juxian tower. Just past this tower on the right is a footpath leading down to Tangjiazhai and then Bagezhuang village. This can come as an overwhelming relief for those who may have crossed over the Sky Bridge and desperately want to avoid having to return the same way. Beyond the Juxian tower, the wall continues only in fragments along a very steeply up-and-down mountain ridge until you reach the Bailingguan section. This area cannot be passed without climbing experience and equipment.

To the west of the reservoir, the wall is much more approachable. You will reach the end of the restored area within less than half an hour. In about another half an your, you will reach the end of the Simatai section and the start of the Jinshanling section. The only things to mark this transition are some small signs and, usually, ticket sellers which will require you to buy tickets to Jinshanling or Simatai, depending on which direction you are walking. If you arrive very early in the morning or late in the evening, they won't be there. See the Jinshanling section for more details about the Jinshanling Great Wall. Jinshanling is about a four-hour walk from Simatai at an average, leisurely pace. Many people hike between these two locations. Hiking from Jinshanling to Simatai (west to east) is slightly more popular but it's no problem to walk in either direction.

When you go to Simatai, you shouldn't plan on being alone. Sure, you will find other visitors, usually in proportion to the weather but more on weekends and holidays. But you will also find locals selling souvenirs and refreshments. Unlike some Great Wall locations where the vendors tend to stay put, these people will select visitors near the entrances or wherever they find them unaccompanied by others of their kind, and walk with them for seemingly any distance, talking with them and trying to sell them something. These people are generally quite friendly but they are also quite persistent. Some people do not see this as a negative at all, but others do. There are several ways you can handle the situation. You can allow them to walk with you and enjoy the opportunity to make a new friend, and you can even let them carry your pack for you. You can buy a T-shirt or some postcards or a book or whatever from them right away, and then ask them nicely to let you proceed by yourself. You can try climbing too fast to allow them to keep up with you and talk at the same time, but these ladies in their house shoes will probably surprise and even humiliate you. You can also tell them politely but firmly that you will not be buying anything from them and you don't want to waste their time. But please remember that they are just trying to make a living and like so many other people, tourism has presented them an opportunity to do so. For most foreigners, the deal is very reasonable indeed, and of course they should be bargained with before agreeing to any purchase, as the initial asking price is bound to be too high. 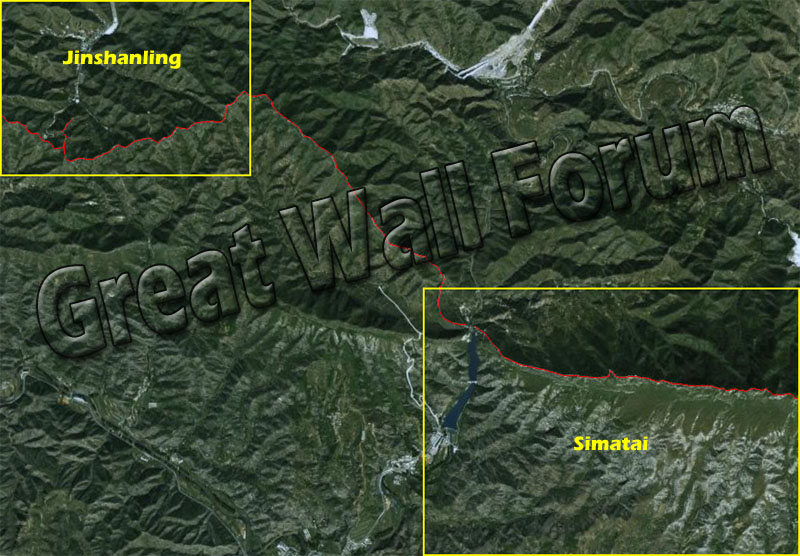 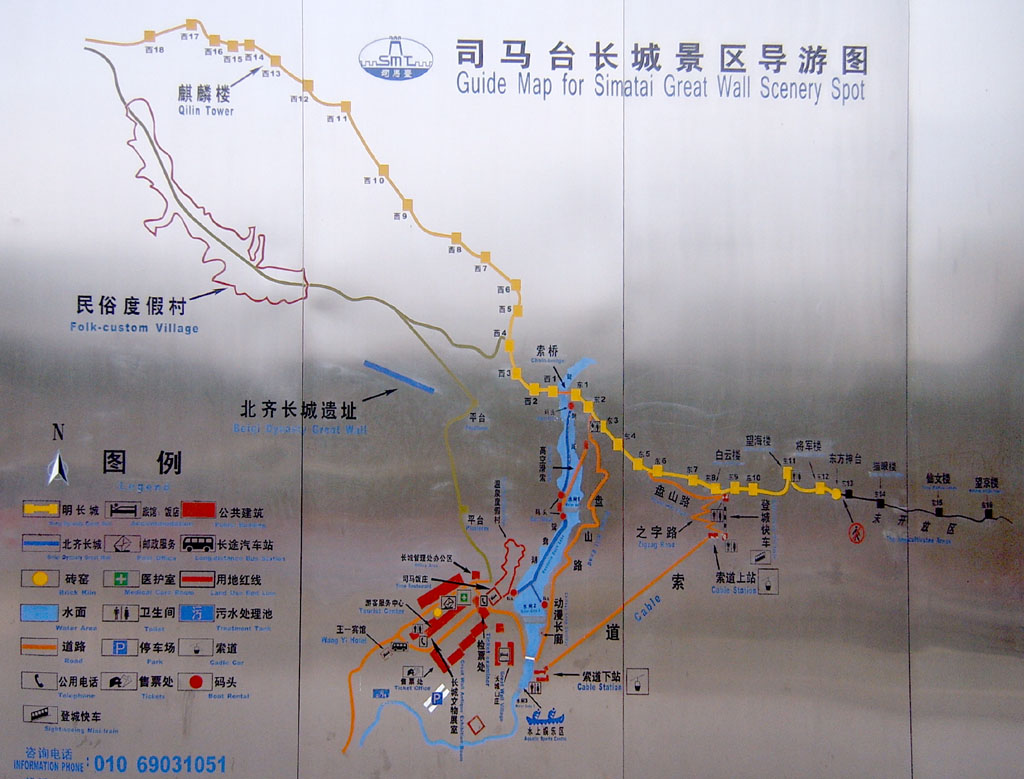 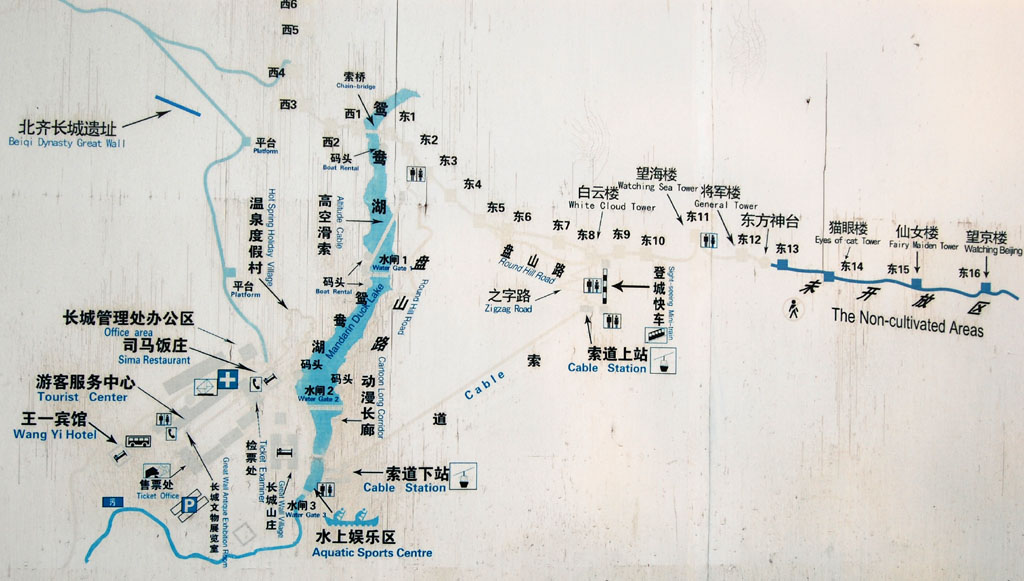 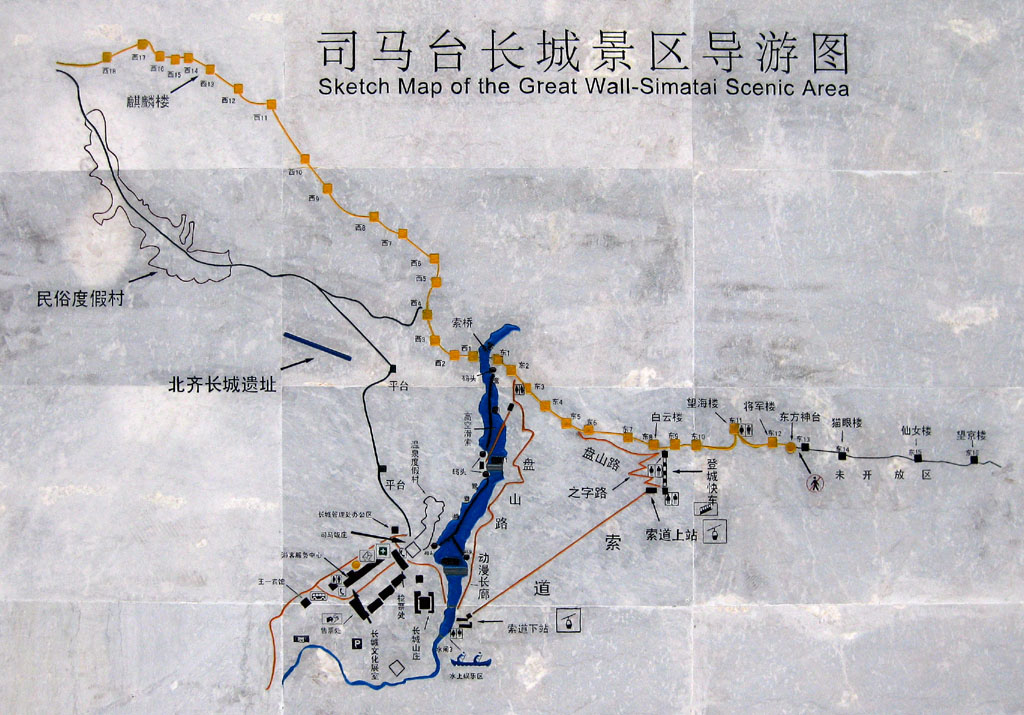 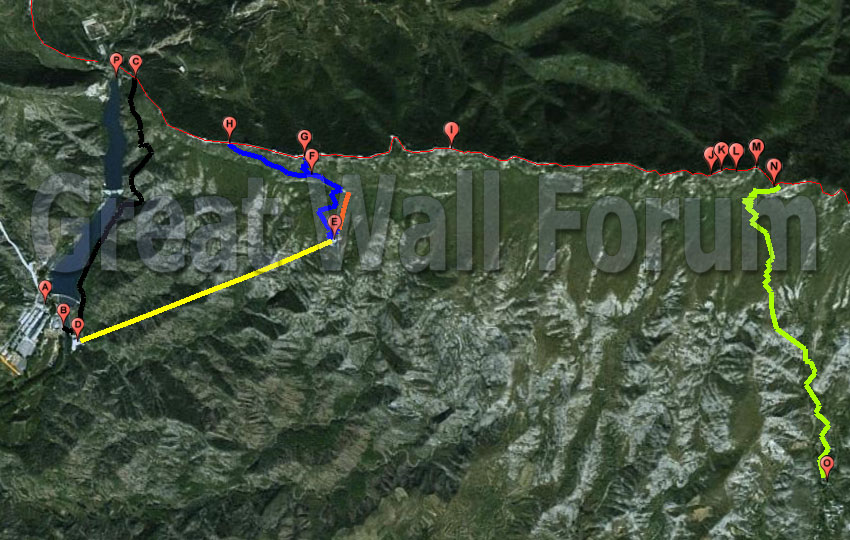 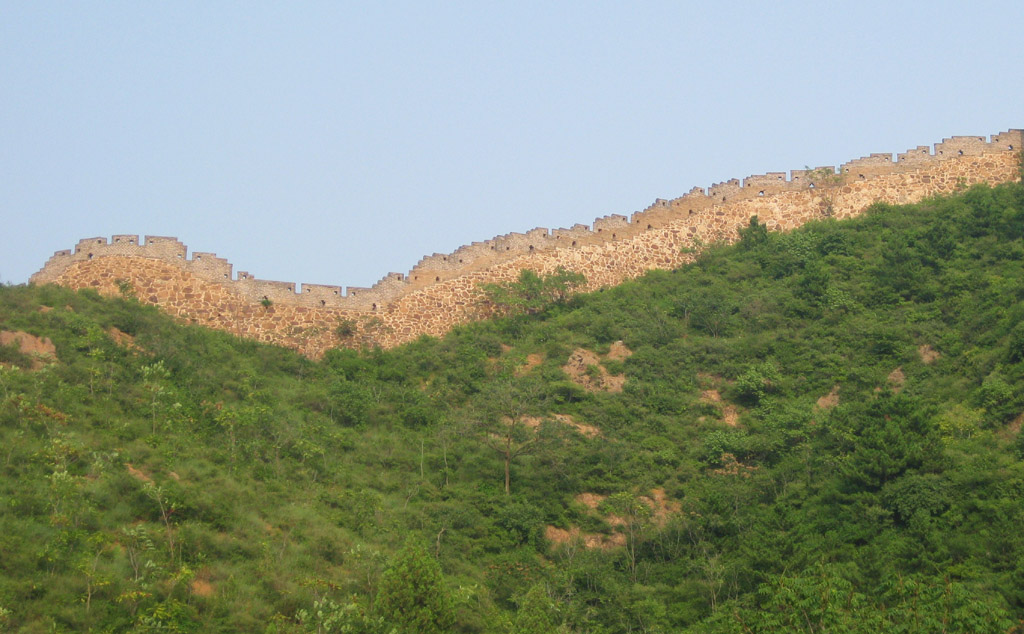 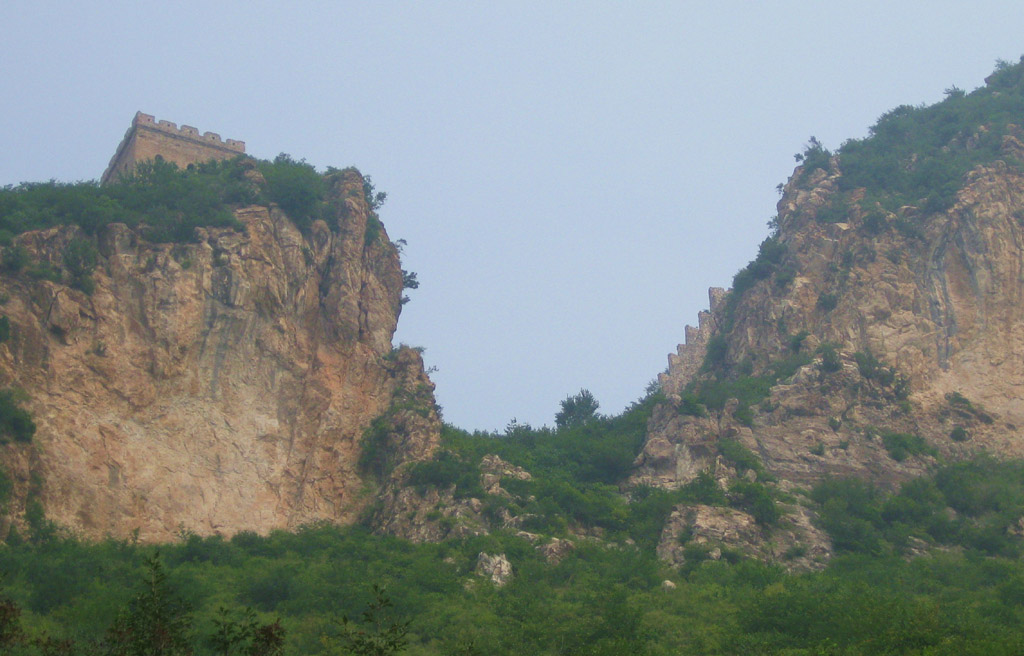 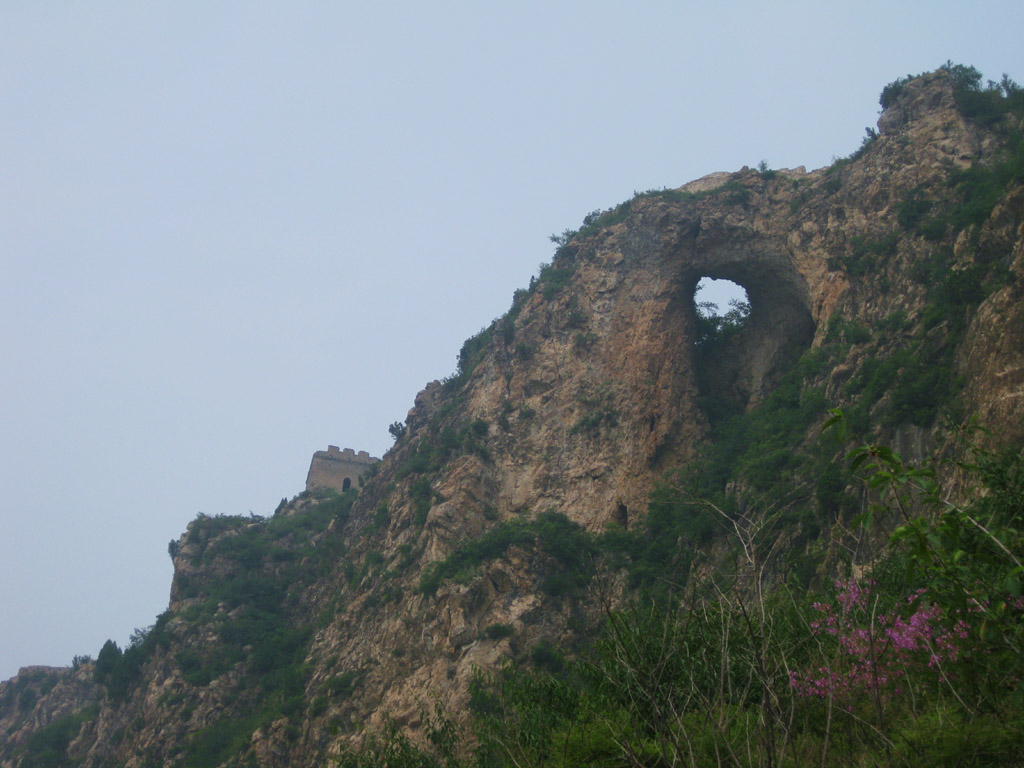 Tianti cave
Tower 13 on the left 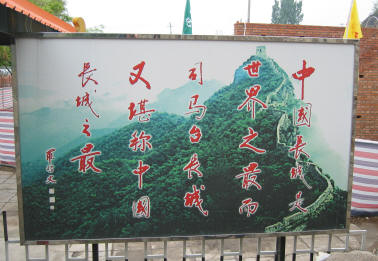 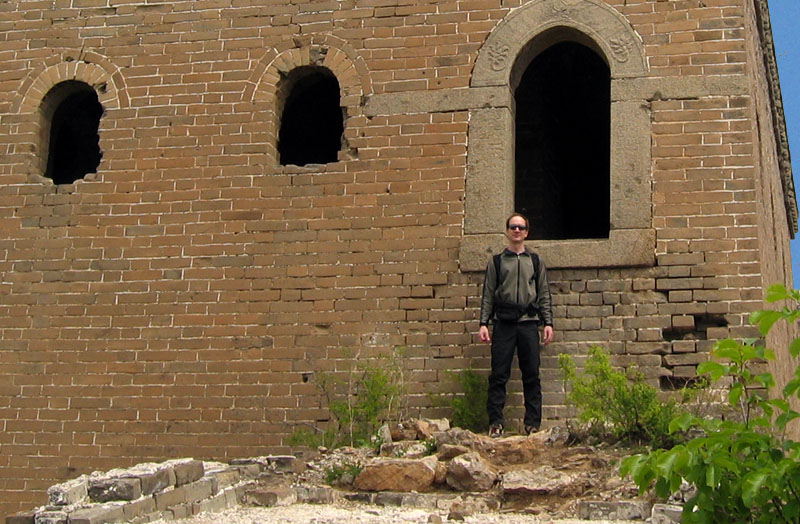 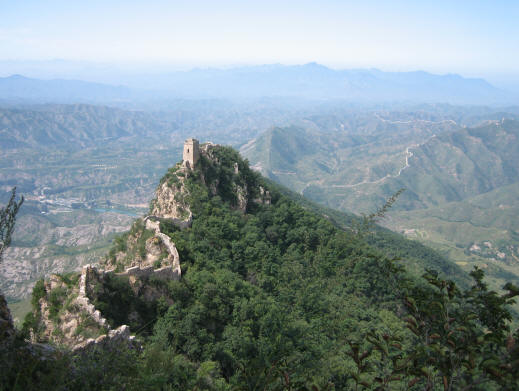 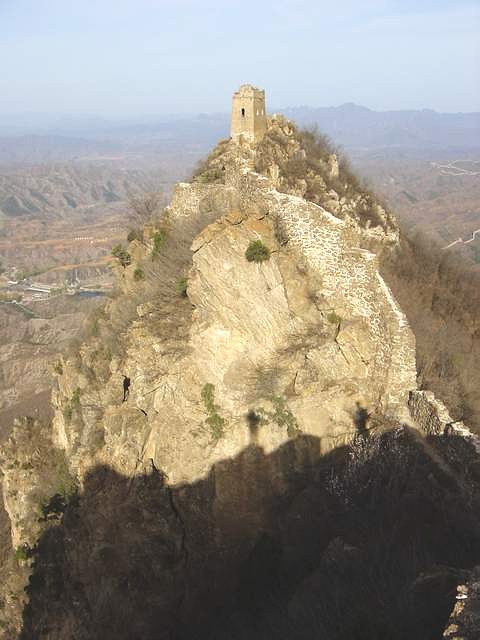 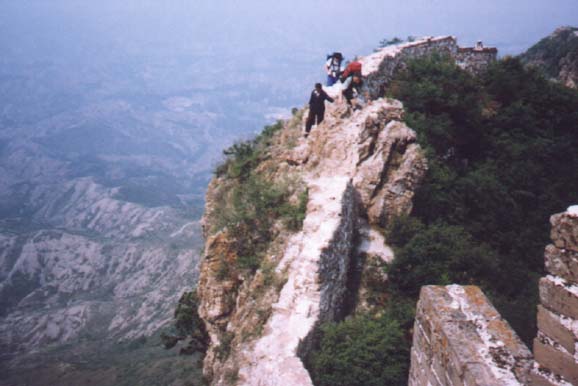 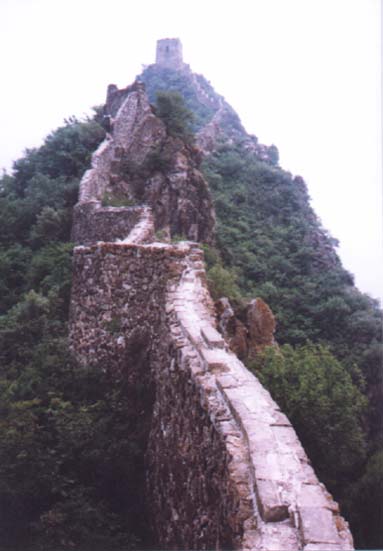 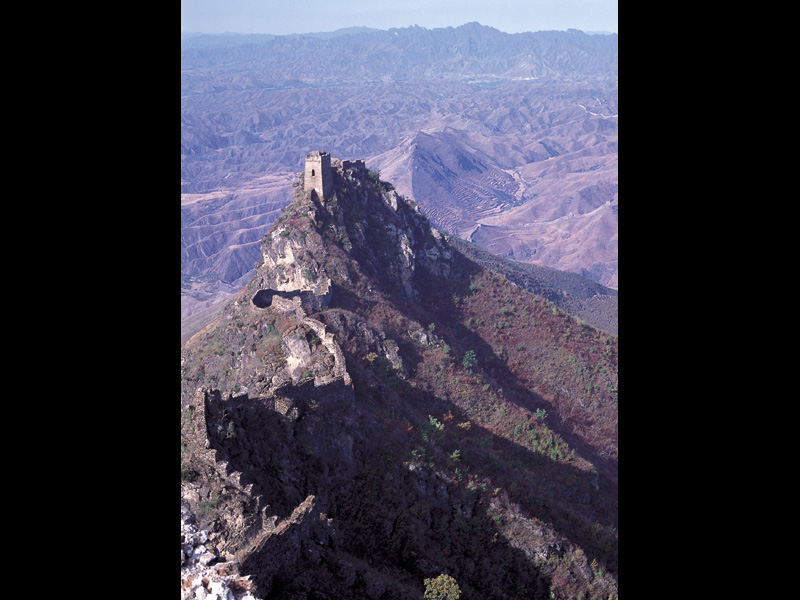 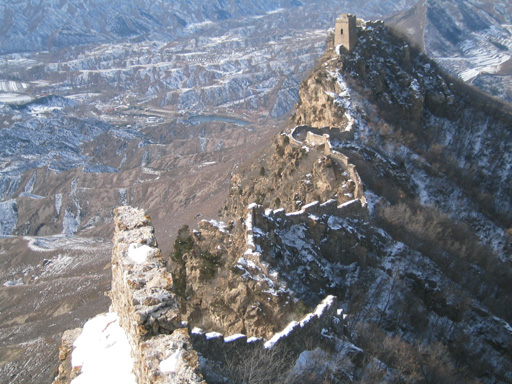 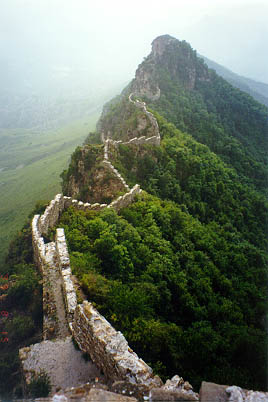 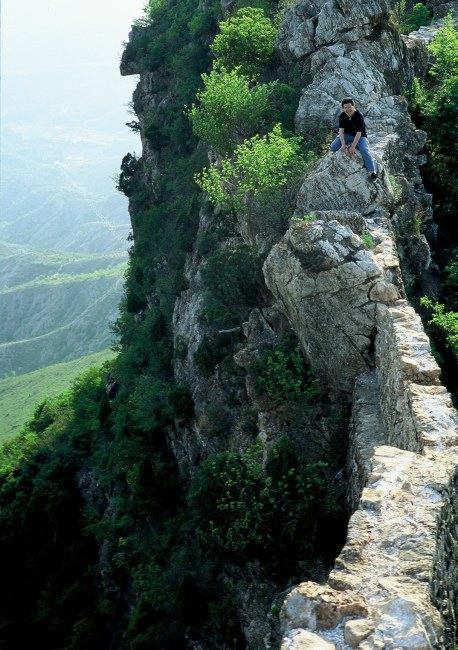 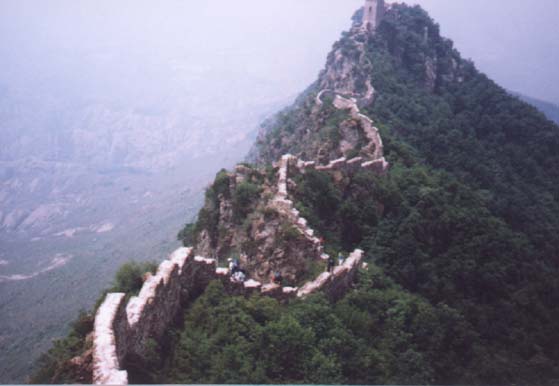 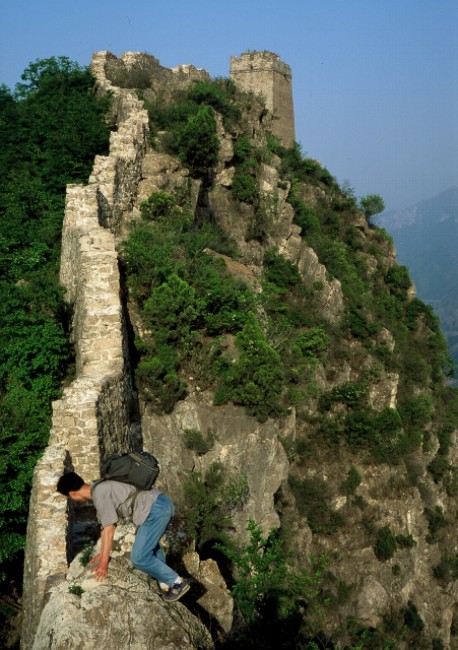 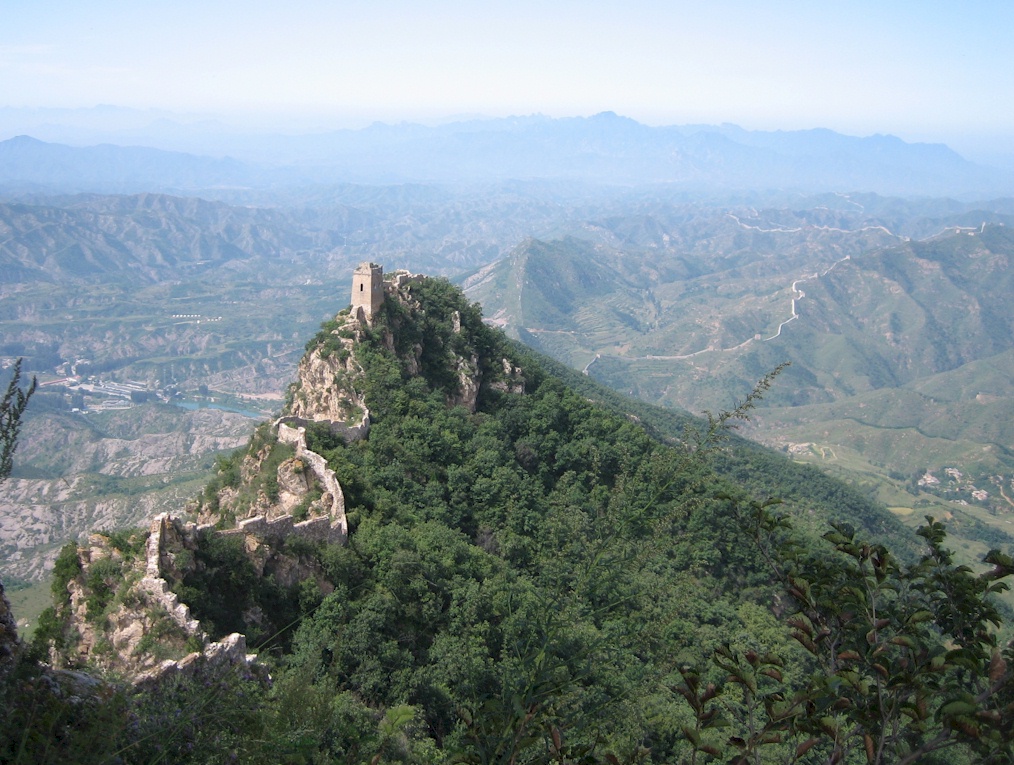