At the Huachangyu pass, you will find two Great Walls separated by only about 36 meters (120 feet). The wall further to the west was built in the early Ming Dynasty and the one further to the east was built later in the Ming Dynasty. Because this area was vulnerable, it was decided that two walls here would provide extra protection. So when it was time to reinforce the earlier wall, while most of the new wall was built on top of the old one, a span of about 370 meters (1200 feet) of the existing wall was left intact and a new wall was built alongside it. Brick battlements were also added to the top of the earlier, stone towers. There are very few places along the Great Wall of China where this can be seen. 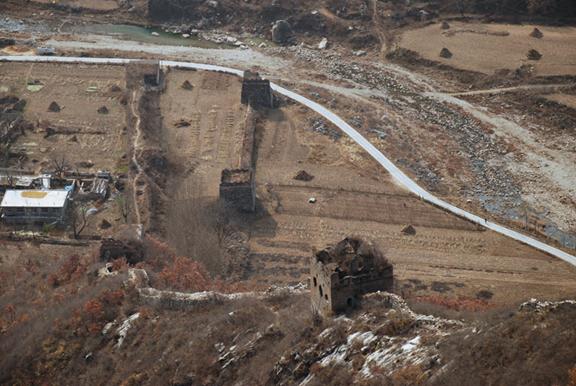 If you climb to the north from Huachangyu pass, you will encounter gaps in the wall after the second tower, and again after the third tower. There are reasonably easy paths to follow to continue going up the mountain. The fifth tower you will reach is called Xiaoxifulou (young wife's tower or small wife's tower) at 40°9'50"N 119°31'13"E. This tower has fantastic stone carvings on the doorway. Very artistically executed, these carvings depict lotus flowers and deer, representing peace and tranquility. The elevation of this tower is about 520 meters (1700 feet). Beyond Xiaoxifulou, there are significant gaps in the Great Wall if you try to follow it to Naziyu. The cliffs here provided a good barrier without the need to build walls.

If you climb to the south of the pass, you can only proceed about 250 meters (800 feet) and pass two towers before you reach a gap which is difficult to pass. About 900 meters (3000 feet) to the south of Huachangyu pass is another pass called Daxukou. This pass can be reached easily by following a dried river bed from the road. Here you will find several watch towers and old fortress remains. Continuing south from here, there are only small fragments of the Great Wall in this direction until you approach Weiziyu.