Bijiashan marks the end of the long leg of the Great Wall that extends in a generally southwest direction and along or near the border between Beijing Municipality and Hebei Province.

The Great Wall ends near the summit of the mountain known as Bijiashan. To the north, about 3.2 kilometers (2 miles) before the end of the wall, is the town of Shuitoucun. This is the best access point for the Bijiashan Great Wall but is difficult to reach by car from Beijing. Shuitoucun is a very small village with a small number of residents and a very limited availability of food and other conveniences, so come prepared.

Because it was decided to end the Great Wall at this location, this was a heavily fortified area. In the immediate vicinity, there are now many Ming Dynasty military relics including a water gate and several cannon basements remaining in good condition. From the village it's easy to find several structures up on the mountains surrounding the valley.

The steep mountains to the south and west of this area provided an excellent natural barrier; no wall was deemed necessary in this area and no invasions ever took place there. 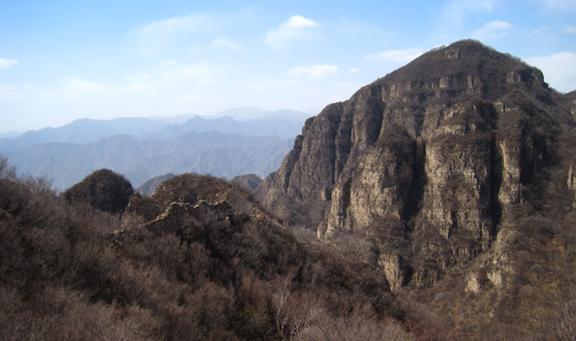 The Great Wall at Bijiashan
Photo by Richard Fairbrother

It might seem like a good idea to walk along the Great Wall from the Shuitoucun water gate to the end of the wall. But although the wall is in highly variable condition, with some well-preserved sections and some that have collapsed completely, the condition seems to get worse and worse as you get farther from Shuitoucun. About ¾ of the way to the end, there is a very dangerous section, where the wall crosses a canyon. Passing this point on the wall requires serious rock climbing or a lengthy and difficult detour. Fortunately, there is a good trail to the north of the wall and roughly parallel to it. The trail is about 3.2 kilometers (2 miles) long and goes from Shuitoucun to the area at the end of the wall. At the end of the trail is an old fortress. The fortress has a solid base of stone. On this level floor there are the ruins of a few smaller structures, said to have been soldier's living rooms.

The Great Wall in this area has many circular towers and towers with rounded corners. The wall in general was built to a high standard of quality and dimension due to the importance of protecting this area close to Beijing. And, in addition to the main wall leading between Bijiashan and Badaling, there are many older, shorter walls in the Bijiashan and Zhenbiancheng area.

The Great Wall east of Bijiashan was invaded by the Japanese during the Sino-Japanese war. You can see many battlefields and other historic sites in the area.

Location summary: Bijiashan is about 61 kilometers (38 miles) northwest of downtown Beijing. It is about 11 kilometers (6.9 miles) southwest of Dayingpan.

Driving directions: From Deshengmen City Gate near the Jishuitan subway station on the north side of Beijing, drive north and northwest on the G110 Badaling Expressway for 75 kilometers (46.6 miles). Exit at the X415 county road and drive north on X415 for less than a minute to the X457 county road. Turn left and drive west on X457 for 3 kilometers (1.9 miles). Turn left on 127 and drive south for about 19 kilometers (12 miles) to the end of the road at Shuitoucun.